Shark dives have become increasingly popular and for those wanting to see sharks up close in their natural habitat, Costa Rica is the place do it. This Central American nation is an adventurer’s paradise, dotted with reefs, islands, caves and canyons. Its tropical waters make an ideal location for both divers and sharks alike and is home to one of the most heart pounding species – the bull shark.

Undisputedly, the best location in Costa Rica to dive with bull sharks is thirty miles off the coast of Playa Ocotal at Islas Murcielagos, otherwise known as The Bat Islands, where bumping into one is a common occurrence.

This string of magical islands sits off the tip of Santa Rosa National Park and is void of all human life except for a lone ranger station and environmentalists. Safe from development, these primal islands and their surrounding reefs have likely changed very little over time. The Bat Islands have become a hot spot for advanced divers due to deep sites, crystal clear visibility and a host of large sea species.

For an experience that will get your heart pounding, visit “The Big Scare.” The site averages out at 90ft landing on a sandy bottom where bull sharks This spot is the place to get up close and personal with the bull shark, with many reaching up to nine feet.

Bull Sharks aren’t the only creatures you will see in the Bat Islands. The area is known for its range of species due to its location along migratory routes. Graceful manta rays, devil rays, eagle rays, nurse sharks, and even the elusive whale shark can be seen along the Bat Islands dependent upon the time of year.

The best time of year to see bull sharks is between May and November during Costa Rica’s rainy season when waters are calmer and rain drives sharks closer to shore.

Bull sharks are an aggressive shark species typically recognized by their stocky build. They have a short, broad and blunt snout. They are grey in color with a white under side and possess small, dark eyes. While they are aggressive to their prey they are just the opposite with divers. Diving with bull sharks is very common and safe. In the 30+ years the Bat Islands has welcomed divers, there have been no attacks.

Widespread coastal and fresh waters. Though they prefer the salty shallows of bays and estuaries, bull sharks have been found as far inland as Illinois as well as hundreds of miles in open ocean. Their tolerance for fresh water is what sets them apart from other sharks. 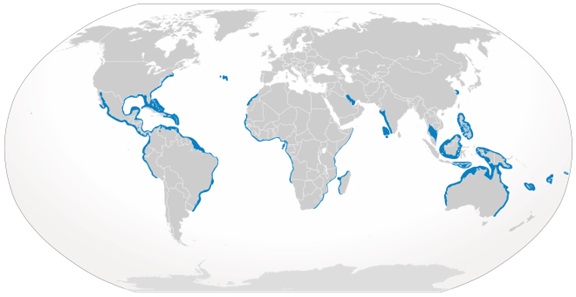 Bull sharks are found worldwide in the warmer coastal waters of hemispheres close to the equator.

Solo hunters, bull sharks are masters of the bump-and-bite technique when hunting prey. The bull shark is more or less a garbage disposal and will eat just about anything it deems food, though fish, turtles, crustaceans birds. According to reports, they’ve attacked creatures as big as hippopotamuses and are even thought to have attacked a racehorse in Australia.

How to Have a Safe Dive

Bull sharks are not mindless man-eaters, but are still wild creatures to be treated with respect. Here are some tips to make sure your next bull shark dive is a good one.

Costa Rica Is Open For Diving! Come And Make Some Bubbles
October 14, 2020

Awaken Your Senses, Why Is There So Much Noise Underwater
May 26, 2020